For nine years the red folding chair was a defining object in the DfbrL8r-archives.
In those years the chair was used in at least five performances of different artists.
I decided to find it a new home, to take it away from the spotlights
and to bring it to a place where it could lose its artistic background
and become the mundane object it was meant to be.

In the performance I read a text explaining the process and results. 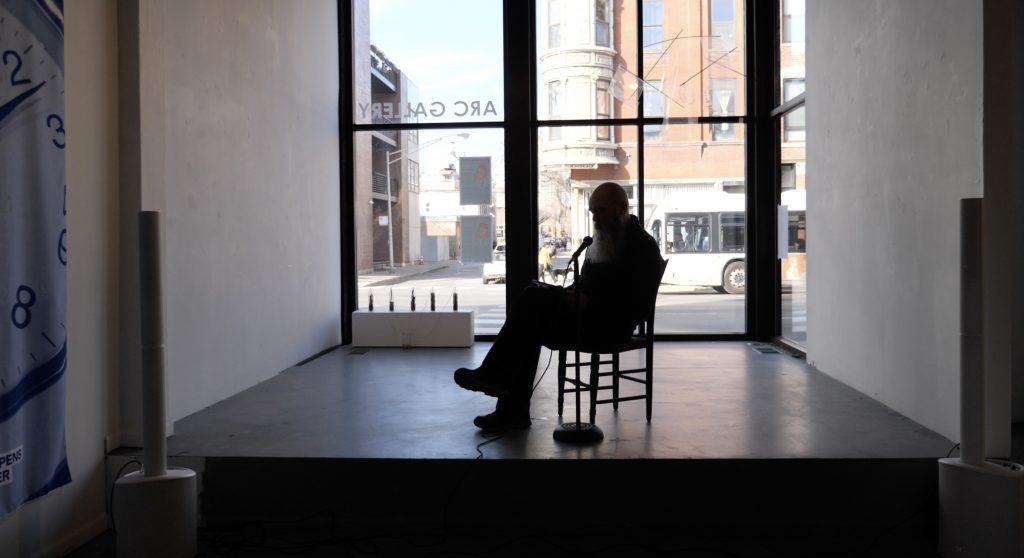 A chair as any other

There is this chair, a red metal folding chair.
On the bottom is a sticker with the brand: Krueger, Green Bay, Wisconsin.

In 2011 the chair was used by Martine Viale in her performance;
a performance I have no further knowledge of.
When Martine left, the chair stayed.
The performance was over but the object remained.

From that moment, it was not just a chair,
it was the chair ‘that was used in a performance by Martine Viale’.
In a way the chair took over her presence.
Her performance was past history and the chair became a piece of evidence.

Since that day in 2011, many people will have used the chair to sit on,
sometimes with and sometimes without the knowledge of its past.

After the performance of Martine, the chair emerged as a prop
in at least four more performances by other artists.
I have no idea how it was used in these occassions:
just as an object to sit on, or maybe partly as a historic remnant,
a chair with an artistic background, with a certain aura.

The concept of the What Remains-project shows
there is a clear awareness of this status: the objects are recognised as relics.
This project starts where everything usually ends,
with what is still there, when everybody has left the party.
The objects turned into a catalogue, a list of souvenirs.
I wanted to respond to their change of status.

I decided to choose one object and to give it a second chance,
a possibility to escape the context it was captured in.
I chose the red metal folding chair because it has still got its original looks,
It wasn’t physically altered in the process,
so it had a fair chance of getting a new future elsewhere.

I took it from the basement of the gallery and brought it to my hotel room.
I noticed the chair wasn’t in a perfect condition: The seat back came loose a bit
but, being a relic, this did not hurt its status.
It might even have increased it a bit, like having a scar from a fight long ago.
But it was clear that, as an utensil, it lost some of its quality.

I decided to repair it, in an improvised way, and that worked out fine.
It was not as good as new but very usuable again.
The minor repair ensured that people would now want to have it for its functionality,
not for its looks.

Next thing was that I needed to find a place where it could again pick up a life of its own.
I thought of some possibilities:

-I could just give it away.
That would raise the question why I want to give away an old red foldable chair.
I would need to come up with a plausible explanation. Being part of my project was no answer.
The receiver could of course not be someone familiair with the gallery,
with the project or with the performances.
My offer should not be recognised as having arisen within an art context.
But then what could be an acceptable explanation of my offer?
If my proposal was not clear in itself,
it would, for the new owner, create a new special story
and that would again stick to the chair.

-I could just leave it somewhere unnoticed in the street.
This would create a very uncertain future for the chair.
It could be found and taken away, to be used somewhere as a new piece of furniture,
but it could also been destroyed by some kids or taken away by garbagemen.

-I could try to sell it.
The advantage of this would be that my motivation would be understood as driven by profit.
I would look like someone who obviously needed money.
But who would want to buy an old chair like that?
How was I going to find a person who needs it?

-I could go into a secondhand shop and try to drop it somewhere, unnoticed.
If I manage to do that unseen, the owner will be very surprised to find it later,
but will then try to sell it anyway.
But I realised that every owner of a secondhand shop
would immediately notice a chair in the hands of somebody entering the shop.

But whatever approach I would choose, I needed it to be convincing.
I did not want to create a new story that would be remembered.

Yesterday I decided where to take the chair.
To be sure to exclude every possible connection I will not reveal which option I chose.
In this talk I also did not show a visual image of the chair
as that would reconfirm its status as an art object.
I hope that the organisation will now also stop using the image for publicity,
and will remove it from the catalogue.

The chair is gone and I am sure it will never again be witness to its artistic past.
There is a good hope it will again be a chair as any other.

The video of the performance