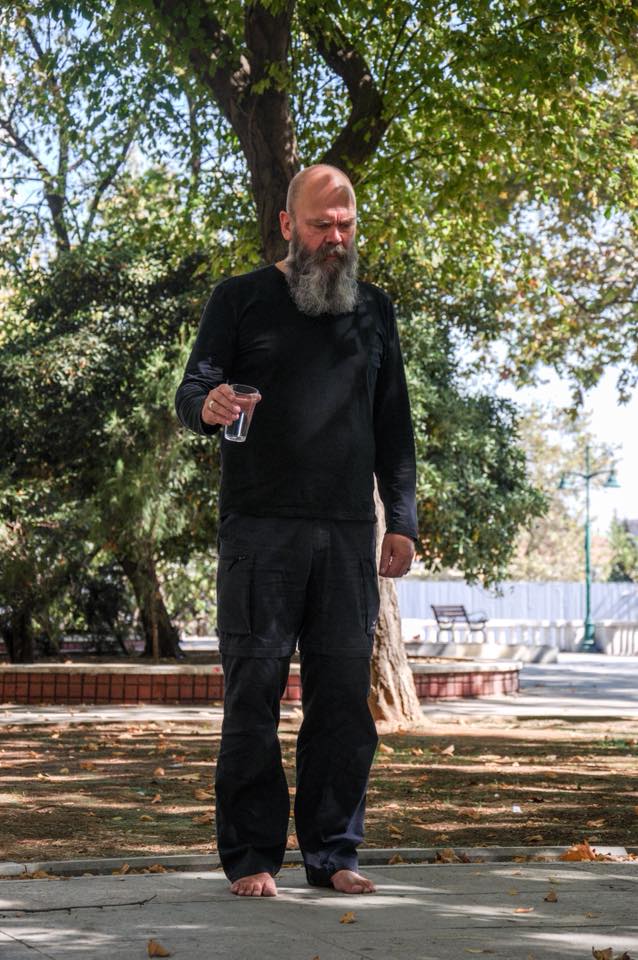 I am standing barefoot, a glass of water in my right hand.
I wait for silence around me.
I then bow forward very slowly and spill some water. After a few drops I move back a bit.
The bowing and moving back is repeated until the glass is empty.
I return in an upright position.

I walk into the gallery. On the floor are three big canvases leaning against the wall (frontside turned to the wall), each one about 130 x 140 cms. They are covered with plastic to protect them. You can’t really look clearly through the plastic. Taped on the works is a piece of paper with the written text: ‘Please don’t touch! I’ll come and fix it as soon as possible’.

I measure exactly where to hang the paintings, then drill holes for each of them, put screws in the holes and hang the works carefully on the wall. After I hanged the last one, I clean the floor in front of the works. Then I take off the works in the same order, put them against the wall, take out the screws, the plugs, fill the holes with plaster, paint the spots white again, clean the floor, take my equipment and leave the gallery.
This performance is repeated a number of times at unannounced moments during the exhibition
Let’s Get Physical,
presentation of MaHKU at Kapitaal, Utrecht, Netherlands.
June 2013

A. Starting in the hall of the train-station we slowly walked in a line to a department store in the shopping mall. Everyone was following the person in front of him/her at a distance and as discreet as possible. Nr.1 was first in line, nr.6 was last in line.
B. When we walked into the shop we went up two floors by escalator.
C. We walked around, still in line, picked up some things from the tables (randomly), studied these objects at all sides and then put them back on the table.
Everyone was imitating the person in front of him/her as precisely as possible. Doing this we related as a (widely spread) group by synchronising our movements.
D. After five minutes nr. 1 slowly walked back to the elevators and returned to the ground floor. One by one the others followed. Nr 1 walked out of the door and waited there for the others.
E. When everybody was outside the performance was over.

Instruction for participants: This performance is meant to be unnoticed by the public. Please do not act unnatural, be as inconspicious as possible!

All participants go to the last corridor of the train (startingpoint).
It starts with a (first) person walking slowly into the first coach, as if looking around for a convenient place to sit. He finds a place somewhere in the first coach (when it is not possible to sit just stand and wait in front of the toilets). After the first person started, the second one counts to 60 and then follows him, walking in the same direction. He passes the first one and finds a place in the second coach (or at least out of site of the first one). When the second one leaves the third one starts counting and then starts walking. He passes the first and the second one, finds a place out of sight of the second one and so on. When the sixth one walks he goes on till the end of the train, but will not find the right place to sit. Then he walks back, still in the same slow and searching way. When the sixth one again passed the fifth one, the fifth one waits another 60 seconds and then follows him walking back slowly, again looking around. When the fith person passed the fourth waits another 60 seconds and starts also walking back and so on. Finally everybody returned to the starting point. End of performance.

When finished all participants write a short note about what he/she noticed doing this performance.

In a train (driving full speed towards Berlin)
March 15 2013